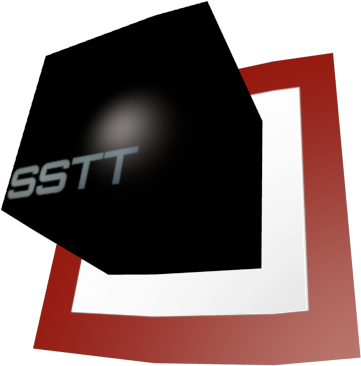 SSTT - (Simplified Spatial Target Tracker) is a computer vision based tracking library for Augmented and Mixed Reality applications. SSTT aims to be used for novel interaction methods in AR and therefore prioritizes robustness over speed. It is a versatile toolbox of vision based tracking modules for desktop and embedded systems such as mobile phones. It implements numerous model based approaches from traditional markers, ID based frames, rectangular textured targets, natural feature targets and object recognition with online learning. SSTT supports dynamic and robust occlusion based interaction with targets. Based on the object tracker and classification system a high-speed 6DoF face and eye-tracking allows for new interactions with augmented content.

The SSTT software framework is highly portable and runs on a number of devices including mobile phones. It is optimized for speed and is modular in terms of the concepts used to track targets. SSTT is focusing on robustness but is also faster than most other libraries. SSTT is utilizing an optimized version of OpenCV with enhancements for SIMD extensions in modern processors such as SSE2 and ARM Neon. It is implemented internally with modern C++ but exposes a pure C API in order to support a maximum of portability. Due to its clean design SSTT can be easily embedded with any 3D engine. SSTT ships with examples to utilize Unity3D, OpenSceneGraph, Ogre3D and Irrlicht3D.

SSTT core has the following features

SSTT is a research tool and under constant development. Therefore, I welcome any requests for research collaborations from academia and industry on topics covered in SSTT, namely natural feature tracking, Structure from Motion, Around Device Interaction etc. pp.

However, I have no plan to make SSTT available under an individual licensing scheme as a library. The sole reason being that I have no resources to provide appropriate support that you, as a customer, and I as the developer would expect from a quality piece of software.